Why we support comparing current and desired performance

In Spidergap, you can ask for feedback on both current and desired performance. Why? Because it can result in much more valuable feedback!

Written by Paddy Mann
Updated over a week ago

At Spidergap, we want to make the 360° Feedback process as valuable as possible for the person receiving feedback.

Surprisingly, most 360° Feedback tools do a really bad job at answering these questions. This is partly down to how they present the results - as explained here - and partly down to the feedback questionnaire.

Here's a typical question from a 360° Feedback questionnaire:

The feedback provider is asked to give a score out of 5, with 1 meaning "Poor" and 5 meaning "Exceptional".

The feedback questionnaire will have around 30 of these questions. We assume that this, combined with a few free text-questions, will answer our 3 key questions above.

However, if the areas you are assessing are not all equally important to the people being assessed, you will only find out:

If a new sales manager is weak at strategy, that does not mean it needs to be their top priority for improvement. But if they're weak at communications then that's likely to be an issue.

But by asking for a score out of 5, we only find out which areas are strengths and which are weaknesses. This means that the feedback report simply can't give a clear message about which areas to improve. And this can lead to confusion, anxiety, and personal development plans that do not tackle the areas that need it the most.

Why we support a comparison current vs. desired performance

In Spidergap, we allow you to compare current and desired performance:

We still find out their strengths and weaknesses (though we don't really care about their weaknesses!)

Brilliantly, by comparing the scores given for current and desired performance, we also find out which areas need the most improvement.

And this means, we can give a really clear message in the feedback report about where to focus your personal development: 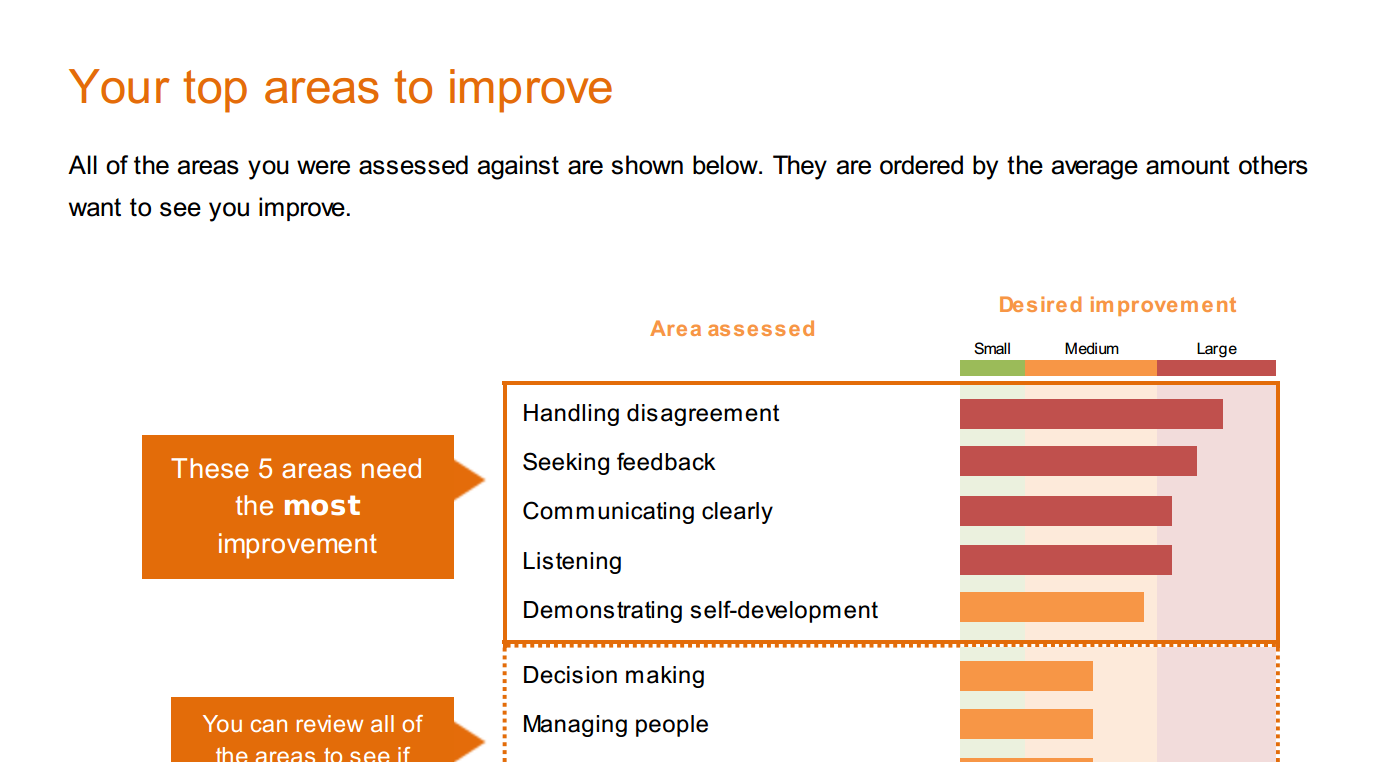 While consultants have been using this technique of comparing current and desired performance (often referred to as "gap analysis"), it's far less common in 360° Feedback tools.

Here are some common questions we get asked:

Are there times where it makes sense to only assess current performance?

Yes - if it is equally important for someone to be a 5 out of 5 in every area they are assessed against. In this case, the "desired performance" will always be 5 out of 5 so we can simply not include it in the questionnaire.

This is often the case when you customize the questionnaire to align with your organizational values, or a specific set of skills for a given role (e.g. a sales rep).

Won't it take much longer to fill in the feedback questionnaire?

There's often a concern that asking for both the current and desired score will mean the questionnaire takes much longer to fill in and respondents will get frustrated.

This isn't the case. Most of the time spent answering a rating question is spent understanding the question and thinking of examples. It typically takes only a few seconds extra - per question - to provide the extra score for desired performance.

Won't employees struggle to understand why and how to give a score?

We've supported customers in running over 100,000 assessments and often hear from managers who are worried about including both a current and desired score. It's often not something they, or their colleagues, have seen before.

It's been more common for customers to first ask for the desired performance to be removed - which we're happy to support - and then decide to re-add it again once employees have reviewed the feedback report (and understood why it was important!).

Did this answer your question?