How to get a 99% response rate

Written by Paddy Mann
Updated over a week ago

If we want participants to make use of their feedback, we need to make sure the feedback is useful. So, we need:

It’s this third point that can be scary when managing a large-scale 360° Feedback project. It sounds like a massive administrative burden to chase up thousands of people being assessed!

We recently supported a customer in getting a 99% response rate with 700 people being assessed across 10 locations with over 6000 requests for feedback. Here’s how they did it…

Be clear on expectations

We talked in the previous chapter about getting participant ‘buy-in’ and holding them accountable. As part of this, we need to be clear on our expectations.

It’s great to aim for a 100% response rate, as then the expectations are clear: Everyone must provide all of their feedback before the set deadline. Participants should understand that this is essential in order to help the people being assessed to prioritize the areas they will focus on in the year ahead.

Don’t let people ask for too much feedback

With any 360 Feedback project, it’s important that each person receiving feedback gets enough feedback. When running at scale, it’s also important to make sure people don’t ask for too much feedback.

Doing so will lead to respondents being overwhelmed with feedback requests, and they’ll have less time to spend giving good quality feedback to each person. So, be clear on how many feedback providers each participant should choose!

We normally recommend one Line Manager, one Self-Assessment, 2-4 Peers, and 3-6 Direct Reports. This will give enough feedback to be useful, but avoid creating too much work for feedback providers.

Manage people who are too popular (!)

If you’re asking participants to choose their own feedback providers (which we do recommend at this scale), then you’re going to find that some people are too popular for their own good and may quickly receive 20 or more feedback requests.

This is one of the few occasions where you do need to get actively involved. You’ll need to find out who has requested feedback, and in some cases you’re going to want to remove the requests. This may mean asking someone being assessed to nominate an alternative feedback provider.

Fortunately, in Spidergap, it’s really easy to spot people that have too many feedback requests:

Give respondents 3-4 weeks (and avoid holidays)

There’s pros and cons to both short- and long-deadlines. I’m a big fan of shorter deadlines as it leads to an increased sense of urgency and people are more likely to take action before they forget about it.

But, when you’re working at scale, you need to take vacations, illness, work deadlines and so on into account. When working with our customer, we found that 4 weeks was sufficient.

Expect responses to come in at the last minute (don’t stress!)

There’s no changing human nature. Regardless of how long people have to submit their feedback, their other work deadlines, and the number of reminders you send, you’ll always find that the majority of people leave responding until the last minute.

When we achieved a 99% response rate, almost half of the responses came in the last 3 days. So don’t get stressed if you’ve only got 50% of your responses with a week to go - this is normal.

When you start the project, you should communicate a deadline for people to submit their feedback. As far as communications goes, it’s the only deadline that participants should know about.

But, at the end of the project, it’s probably worth having a final push for responses, for those few people who had left it until the last minute and then got sick! 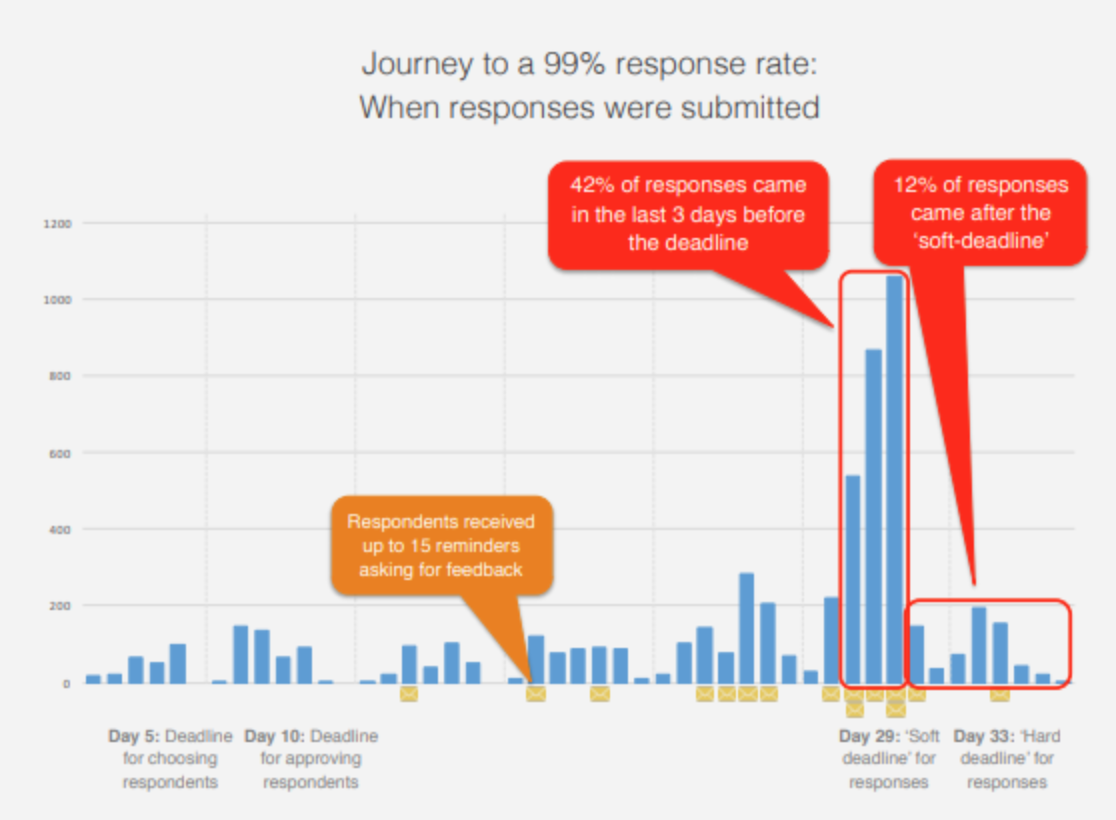 As you can see in the graph above, we took our response rate from 87% to 99% after the initial ‘soft-deadline’ had passed. We then introduced a final ‘hard-deadline’ for the following week. Once the hard-deadline had passed, we stopped accepting responses as it was time to share the feedback.

Did you spot that we sent a whopping fifteen reminders asking respondents to submit their feedback?

This might sound like a lot, but the process of sending each reminder takes just a few minutes, and we’re not spamming participants asking them to sign up to a service they’re not interested in. We’re asking them to complete an action they have to complete as part of their job. And, as any marketer or survey-professional will know, it’s incredibly common that the first few emails will be ignored!

No one was sent the same email twice. Each time, the subject and email content was tweaked in the system’s reminder emails. For example, when there was 5 days to go the subject started with “5 days to go!”. When there was 2 days to go it became “URGENT: …”. This really helps you get their attention and, in turn, get results.

The top priority is that everyone gets some useful feedback

With a week to go, you should prioritize making sure that every single person being assessed reaches a minimum threshold for sharing the report.

For example, you might decide that the feedback report shouldn’t be shared unless the self-assessment, line manager assessment, and at least 2 other responses have been submitted. If this is the case, you need to start identifying which participants haven’t yet hit this goal, and focusing your attention on getting these responses submitted.

While your boss will be impressed if you get a 95% response rate, it’s much more important to be able to share feedback reports with 100% of the people being assessed.

Despite your 4 week deadline, there will be some people that can’t participate. Anyone on maternity/paternity leave for example, or those taking a sabbatical.

It might sound like a trivial task, but it’s worth removing these people from the process as soon as possible. If you don’t, you may find it hard to report to others on your response rate, and you’ll waste time chasing up people who aren’t going to respond!

Did this answer your question?